Will Over 40s Cope with the Impacts of Digital Transformation?

Will Over 40s Cope with the Impacts of Digital Transformation?

According to Stephen Covey, the author of best selling business/self-help book – The 7 Habits of Highly Effective People, if we’re to live a fulfilled life we must  ‘sharpen the saw’.  His 7th habit focuses on our ability to renew ourselves through exercise and spirituality as well as education.  But just how good are we at adapting to change, modifying our habits, or expanding our minds, especially as we get older?  The answer is that we’re pretty good at it if we choose to be.

Not long ago the prevailing scientific powers believed that we are born with a brain that undergoes great change in infancy and early childhood, but then prunes down to the executive organ we have throughout our lives.

But science is no respecter of dogma, and the dogma of a static brain theory has fallen hard. We now know that certain areas of the brain never stop changing. New neurons grow with astounding frequency, and thought itself affects change in brain structure to an extent that few researchers, even 20 years ago, believed possible. Static brain theory has given way to the notions of brain plasticity and neurogenesis.

We’re prone to believe that mental prowess, along with physical ability, peaks while we’re young, but research shows that this thinking is largely wrong.

Co-author of one such study, Joshua Hartshorne from Harvard University Department of Psychology says,

According to MIT Physicist Max Tegmark’s book “Life 3.0: Being Human in the Age of Artificial Intelligence”, he predicts that even those in their 40s today will likely have to change their careers during their working lifetime because of changes driven by the rapid adoption of technology.

This illustration from the wonderful blog on AI by website Wait But Why describes what is about to happen to the rate of technology adoption and human advancement. 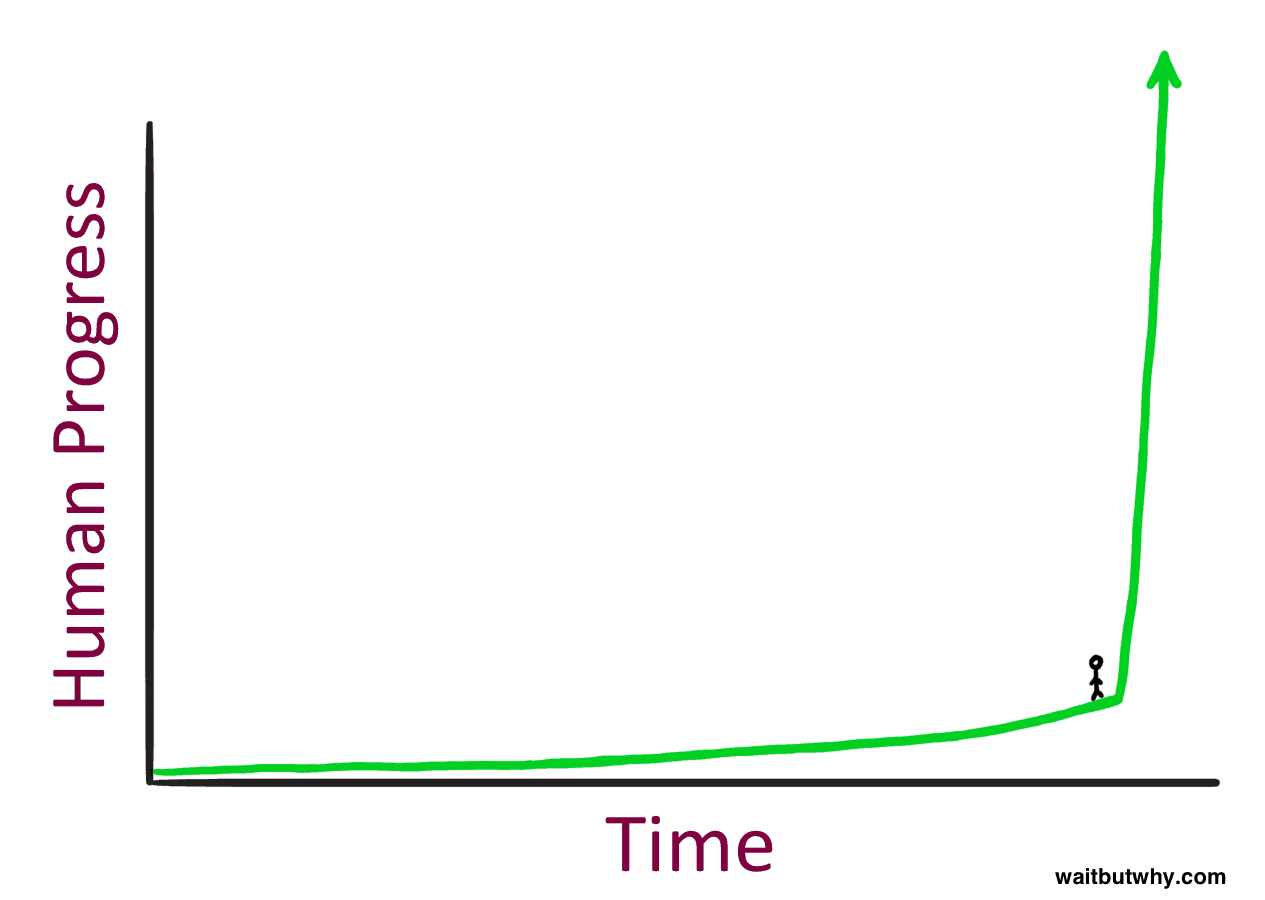 So is this a time to be frightened or a time for opportunity?  It really depends on the culture of the organisation we work in.  If the organisation is agile, is aware of the impending changes technology will have on leadership behaviour and are educating their teams on the effects of digital transformation,  then they’ll see it as an opportunity.  If however we view our role as a ‘job for life’ or at least a vehicle that will get us through to the end of our career, and we’re younger than our mid-50s, all evidence and expert opinion is saying that we’re wrong.

Organisations have to change.  We as individuals have to flex and constantly educate ourselves.  Both have the ability to ‘sharpen the saw’, to morph, grow and be happy with the world if we’re accepting of change and go with it.

About the Author: Judith Scott

Page load link
We use cookies and third-party services to ensure that we give you the best experience on our website. If you continue to use this site we will assume that you are happy with it. Ok
Go to Top